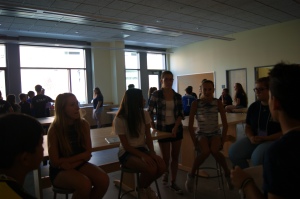 The Class of 2021 took its first step into Morgan over the summer during the three-day freshman orientation program. STEP has evolved into a more student-run program, with upperclassmen taking on the roles of Husky Buddies and Husky Leaders. The Husky Buddies are assigned to freshmen to show them around the school and answer their questions. The Husky Leaders monitor the Buddies, walking them through the schedule for the day. They also lead breakout sessions where groups of freshmen go with their Husky Buddies to different rooms to participate in different activities.

Everyone involved thought the program was a good idea and very helpful for incoming freshmen. “It made me more excited. I had never been in the building before- especially the pep rally was really cool. I didn’t think I’d like it, but it was pretty cool” said freshman Aleia Hayes. Freshman Mac Abbott agreed, explaining that the Husky Buddies “showed me everything I needed to know and walked me through my schedule which was very helpful.”

The freshmen were not the only ones that found STEP to be fun and helpful. Sophomore Husky Buddy Logan Smith said, “My favorite part of STEP was just being a part of the STEP experience and helping the Freshmen.” and Sophomore Husky Buddy Nick Bussiere said, “I wanted to be able to help the incoming freshmen with their transition into high school so they could feel more confident.” Senior Husky Leader Gabby Bussiere said, “ we were able to communicate with the freshman and lessen the burden of the transition into high school. It would be a lot more difficult for the freshmen without STEP.” 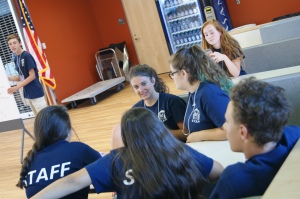 While everyone liked STEP, participants do think that there is room for improvement. The biggest area in need of improvement is the breakout sessions. Sophomore Husky Buddy Carlo Arnoldi said, “Find a replacement for the breakout sessions- something that increases interaction between the Husky Buddy and the freshmen to increase the bond.” Nicholas said, “Husky Buddies should get to do more on the last two days. After the first day, we really weren’t included, and I feel there are better ways to utilize our knowledge.”

Gabby said: “We had some issues with some of the Husky Leader’s lessons, so make them more beneficial to the freshmen in the future.” Logan stated that the school should “Give us some more fresh air outside instead of five minutes. Like for Gym, we could go to the fields.”

The freshmen agreed with the upperclassmen.  “The breakout sessions were very boring though. I’m pretty sure I saw the club list like 6 times. It was very repetitive, ” said Aleia

Guidance Counselor Joni Capobianco said, “if we talked to the 8th graders this year and got with the Husky Buddies, we could base the breakout sessions around what they said.”  Members of The Morgan School want to continue to improve STEP for next year.

Everyone who participates in STEP earns credits towards high school graduation.  “I joined STEP to help the incoming freshman and to get credit. Sweet, sweet, credit,” said Carlo. Students earn ¼ credit every year they attend STEP. If they attend STEP for four years, they get one full credit.

Overall, STEP 2017 or STEP Class of 2021 was a success with room for improvement. While the people we interviewed all agreed that the breakout sessions could be improved, most freshmen came to school feeling much more prepared than before. STEP’s goal is to help the Freshmen transition into high school, and it did its job. All those we interviewed that took part in STEP as a freshmen said that it eased their nerves about high school and made them more confident. STEP will continue to help freshmen become part of the Morgan family.