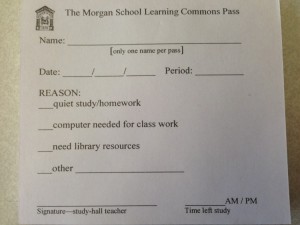 It’s the start of the second semester here at The Morgan School, and with a new semester, come certain changes like new classes, teachers, and in this case, a new study hall system that has been causing quite a stir.  In the beginning of the year, students would simply go straight from their previous class to the library, then sign in.

Now, a student might have to go to the other side of the school first to their mandated study hall room to get a pass signed by a teacher, sign out in their study hall room, then go to the library, hand in the pass, and sign in for a second time.  The overwhelming notion coming from both the student body as well as the teaching staff, is not one of anger or contempt, but simply of confusion as to why the system had to be changed.

When asked about the topic, senior Jason Comeau said,” It’s wasting time. Why would we change the old system when it worked perfectly fine?” Another interesting point brought up by another senior, Griffin Bovich, was, ““It’s not efficient for the teachers either because of all the lines and time it takes for all the students to get the passes signed.”

There have been some positive responses though.  When questioned about his thoughts on the new system, Sean Davidson commented, “The new system is a bit more organized. I think it’s nice to be able to get in [the library] if you need to do work.” Mrs. Whittle also had some positive things to say, “I feel that not having a number cap on who’s going to the library is good because more students will be able to benefit from all the library’s resources.  Doing the passes can be an inconvenience, but it’s only the first five minutes of study, so it’s not too extreme.”

Another source with a positive outlook came from Principal Mrs. Hagness. She stated that:  “We tried to make it more open for all students, so there’s an equal opportunity for everyone to go. Some might want to use that time to relax and others to do work.” With so many conflicting views, it’s difficult to say whether this new change is effective or not, but it seems that the overwhelming theme of the school, is that the old system is superior.