I walked into my freshman orientation program at Morgan, aka “STEP” in August, 2015. I was a shy girl who didn’t know what would be going on for my next four years. I didn’t plan on getting involved much at all. Something about Morgan set off a good vibe and made me realize how lucky I am to be here. I started getting more involved as time went by and teachers became friends.

Freshman year I was in the old Morgan School. For the rest of our years at Morgan, we, the current seniors, were moved down the road to the site where my old childhood apartment used to be. We had

a new school with the same people, until classes graduated and new classes entered. I went from not attending homecoming freshman year, to winning homecoming princess (and a lip sync battle at a pep rally) junior year. I’ve gone from just taking random classes, to somewhat figuring out my future with the help of opportunities from Morgan staff. Freshman year, I told myself I wouldn’t talk to anyone outside of my small circle of friends, and now I feel luckier than ever to have branched out, met new people, and formed great bonds that now make me feel as if some of my peers and I are siblings.

There’s so much I did not know as a freshman, not that seniors are know-it-alls. As a freshman, when I thought of  “high school”, I thought of a school where I’d just try to get by. I thought of teachers as these random adults who were just there to enforce rules and teach us random knowledge of their subject. Now, I think of high school as a place that I wish I didn’t wish the time away from. Now, I think of high school as a place where I got involved. I think of teachers (some of them) as friends now, but I know that all of them mean well and want the best. Without them, I couldn’t have made it. Definitely go to them for help or just to talk because they do care! I was one shy and insecure freshman, and if that wasn’t who I was, then my high school experience for the first year would have been different. However, I still have no regrets, and since I only get one high school experience, it’s best to be myself and grow from there. My freshman year went well because it was the beginning of a new chapter in my life with multiple new people. I’m now left with graduation a day away, wondering where my time went.

I hated gym in middle school. It came to the point where I’d often have my mom write me a note to be excused. This changed when I hit high school; Physical Education teachers Pete Gersz and Kate Iverson made class fun. It was different from my time at Eliot. I took two gym classes sophomore year and by senior year, I didn’t have to take the class anymore. However, it was enjoyable for me, so I took it once more B period first semester. I made this decision not only because I enjoyed the class but also because I wasn’t ready to leave yet. I wanted to take it one last time. Although, not many of my current friends were in the class, I still had a great time and do not regret it one bit. I have spoken to Mr. Gersz about possibly becoming a physical education teacher, and it was great to hear advice from someone in the field who I trust. I may not know what I definitely want to do in my future, but that’s okay. We’re only teenagers, just starting our “adulthoods”. We get so much pressure coming from adults and other peers about our future, that sometimes we tend to overthink and stress about it. What I wish I had figured out earlier, is that it is completely fine to figure out my career as I go because in life, we’re always going to be finding ourselves.

I knew I wanted to be on Morgan golf. What I didn’t know is if I would be on the team every year. I look back now calling myself crazy for ever questioning it. I highly recommend the sport, and it really is a great team with great coaches. I have made friends on the team that were both younger and older than me. It’s a relaxing time and a sport I could enjoy for all of my life. Girls do not compete, but sophomore year, we had a few matches for extra practice; they were all fun because I got to experience what a match was like, as well as meeting new people. I remember two years ago, for the senior night in 2017, I made posters for all the seniors, which made them happy. Later on came my turn…May 15, 2019. Senior night on this date was my last golf practice with Morgan. I was speaking with my head coach (English, Creative Writing, and Film Study teacher Eric Bergman) about how fast it went by. I remember stepping into his classroom one night for a golf meeting, thinking I would have forever. Now it has come to an end. I will miss it a lot, but at least I know who shares my interest of golf.

I knew since middle school that writing is just something I am always going to enjoy. I came into freshman year and decided to

drop a culinary class for Journalism. I walked into that class with my former guidance counselor Joanie Zdunczyk. I came in late and was scared because I only had two friends in the class. The rest were upperclassmen, and at that time, I had only a couple upperclassmen friends. I walked in scared of being judged but grew to realize people’s opinions do not matter. If not all, then most of us were obvious there for the same reason…Journalism. I realized that’s what I had in common with them and that writing has become a part of me. I didn’t exactly know where to start though. My first article was on our school’s dresscode. I thought I would have to only write articles about school, but my creativity flowed as I learned that I had more freedom with the PawPrint.

I took the class again sophomore year and became an editor. It wasn’t a large role, but I liked it. That year I finished off with an article called New Teachers’ First Years at our school. As a sophomore, I did a lot more interviewing and became so much more comfortable talking to people who I did not know. I’ve learned it’s a life skill we all need no matter what and that being myself is all there is to do. Junior year, I took this 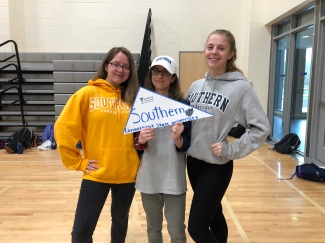 class again and completely changed my ideas for articles. I missed the Class of 2017 so I decided to start a series about different graduates. Some of them I was close to, but others just seemed to be interesting people that I wish I got to know more while they were still here. This made me proud of myself because the alumni seemed to like the articles I formed for them. I have continued the series into my senior year with the Class of 2018, and hope someone will take it over for my class when I leave.

Senior year with Journalism was another story; I was unable to take the class thanks to my schedule and the English 4 credit which was required. I tried getting out of it, but that failed.  I am now very happy that mission failed because I enjoyed English. However, that didn’t stop me from continuing to write.

This has given me a chance to be more involved and pushed me miles out of my comfort zone from who I was as a 14-15 year old freshman. I’ve not only continued my series on graduates but also wrote other articles. This class ended up being the topic of my college essay, so clearly I could write about it forever. I’ll miss Journalism, but I may major in it and also will be attending a journalism camp at UConn this summer for five days.

Senior year, I decided to take a “Husky Leadership” course. I never thought I would ever involve myself in any type of “leadership”. Junior year, though, I was also part of a

leadership workshop with speaker A’ric Jackson. As part of the leadership class, I  help with so many events while learning about leadership. From helping to plan Homecoming, to helping plan Swoosh for Change, it’s been nice to have the opportunities to get involved. I definitely recommend this program if you’re looking for a change or to further your experience here.

I guess the whole second half of my high school career was just the “find more of yourself” period for me. I took more new classes and had some wonderful opportunities. Another class I took was video productions with Media Integrated Media Arts Instructor Jessica Mularski. Not only was it a fun class, but with this teacher, there was never a dull moment. I mean that in a positive way- we have had hilarious conversations in class, a trip to New York City in December, as well as so many different topics of videos to make. I was already into this field of interest, since I’ve been trying to post more content on my YouTube channel. I’ve learned more about editing. Thanks to this course, I have been doing more editing, researching careers for the media, and noticing editing/camera techniques when watching videos and movies. This helped me find my way to possibly working in editing. I can easily say now that one of my biggest dreams would be to move out to California and help out editing a major celebrity’s music video.

Film Study with my golf coach Mr. Bergman also opened my eyes to not only film and media but the world itself. This teacher would always tell us how lucky we are and how blessed he is to be part of our lives. Without some of the caring teachers like Mr. Bergman, I would not have as much confidence or happiness. I’ve learned more about film but also my classmates.

Senioritis hits hard for the last month or couple of weeks left of school. Morgan made me want to become a teacher, but I realized I’d have to do school all over again but as a teacher. I also decided I only wanted to teach at Morgan. However,

despite that phase, I’ve realized that being a teacher would definitely be different from being a student.

Hard work pays off in high school, and you’ll be proud of yourself if you end off the last year strongly. Putting in all the effort is something I didn’t do freshman year, but as time goes by, I  have learned to care more. I picked up the motivation to study and finish up my work. It’s worth it, and teachers are the best resources. Don’t be afraid to go to them for anything.

School shouldn’t get in the way of your future. Some teachers in this school inspired me to go make an impact, so I figured why not go in their footsteps and influence high school careers positively? The teachers here at Morgan do care about us students, and when people say, “We Are Morgan, We Are Family,” it’s something that actually is true. I wouldn’t trade this school, these people, or any memories for anything.