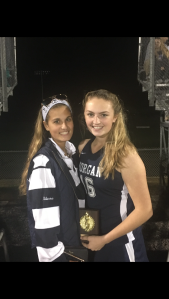 Field Hockey is a game that is played between two teams of eleven players who use hooked sticks to drive a small hard ball towards goals at opposite side goals. All of the positions on the field are difficult, and they all have their ups and downs, but the goalie in field hockey is the most challenging position.  A goalie in field hockey has full body pads to protect and keep the goalies safe from the flying hard shots at the goal.

This year on the Morgan field hockey team, the team was honored to have a very talented and successful goalie. After a tough year with no victories last season, this season the players improved and had a very memorable and successful season.

Freshman goalie Abby Gordon received 1st Team All-Shoreline and 2nd Team All-State. The team, coaches, students, and family are very proud of her for working so hard and never giving up all season.” The Morgan field hockey team was very very proud of Abby because Morgan does not get noticed for field hockey a lot because we have not been the best; so to have a freshman get noticed is very different for us,” claimed Senior Captain Falyn McQuarrie. The team had 203 shots against it, and she saved 166 which is 83% saves and 4 shutouts. She allowed 33 goals.

Abby Gordon attended the All-State Banquet at the Aqua Turf in Southington, Connecticut. Her mother,  Head Coach Melissa Stiver and Assistant Coach Kim Driscoll and me, Senior Captain Abby Pitarra, joined her at the ceremony. The event was well done. They recognized every kid so it was very nice to see everyone who deserved recognition.  To see the people we played against receiving their awards was also very cool. Also, Coacher Stiver is very proud, “Abby has had an astounding rookie year earning well-deserved awards. She is a talented goalkeeper and has a great potential 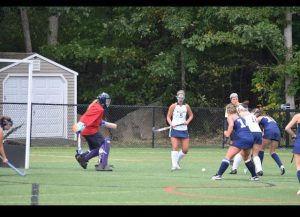 Abby in action during a game

and I can’t wait to see how she progresses over the next three years.” 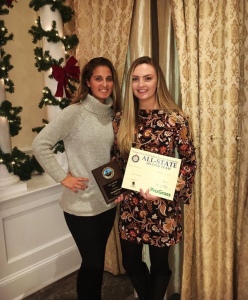 Abby Pitarra and Abby at the All State Banquet

Abby and her defensive teammates this year worked very hard to keep the ball out of the backfield and not let it hit the goal.

Abby shared her view on receiving this award. She claimed. “I am very humble about getting this award. I am very honored to be getting this award because it is a very big accomplishment for me, walking onto the field as a freshman and having endless support from my team and from my coaches I would not have been able to get anywhere without them, and for my girl, Abby Pitarra, for always being there to stop the ball.”

Abby would like to add, “I would just like to thank Morgan field hockey and my coaches and all of my defensive players for never giving up on me even when the game didn’t look very good, and we were on our 20th corner. The defense tried so hard even if it was a hard game. We fought with all we could, and they never gave up on me, and I never gave up on them.”

We are all very proud of Abby and her hard work and want everyone to know how hard she worked as a freshman to receive these well-deserved awards.