Written by Allison Goguen|
Images from the web, cited at bottom of page|

The North Korean Missile Fail: On Sunday, April 15 at 5:21 AM, North Korea launched another missile of theirs in a test run. It was a ballistic missile sent from the submarine base in Sinpo, in the eastern corner of North Korea. However, to the relief of the countries nearby, the missile failed, exploding 4-5 seconds after launch. No one was hurt as it was just a test launch, but this has great significance. This increased the tension even more between America and North Korea, as many are left wondering if the failed missile was merely an accident, or if American hackers had something to do with the failure. Not much is known right now, and disagreements between America and North Korea are only getting worse. More information.

Facebook Shooting: 74-year-old Robert Goodwin Sr. was shot and killed by 37-year-old Steve Stephens on Easter Sunday, April 16. Stephens killed the innocent man after telling him this was over a woman, Lane Joy, and making Goodwin say her name aloud before Stevens shot and killed him. All this unfolded on the internet, live from Steven’s facebook account. In one of the videos, he said, “I killed thirteen people… I’m going to keep killing until… they catch me.” Millions of people were able to see the video of him shooting Goodwin for two whole hours before Facebook finally pulled it down. On Tuesday, April 18, Stephens was seen and chased by police, which ended in Stephens pulling a gun on himself in his car and committed suicide. More information

France’s Election: In Europe, the EU, (European Union) is at risk of ending. To some, who saw the EU as a time and money waster, this is welcome news, while others will miss what the EU provided in its work towards peace and equality. Why is the EU at risk? This is because France might be leaving, depending on who takes over as the new president of France. The elections in France will be between all the candidates participating, and the leading two (presuming no one candidate earned more than 50% of the votes 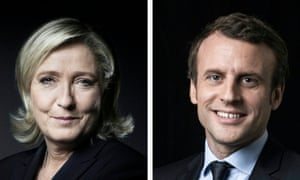 ) will compete again in a second run-off. The winner of the second run will become the newest president. France’s current president, François Hollande will not be running, so this means a major change. So, who are the main two candidates? Just as America had the main two, Hillary and Trump, France’s main decision is between Marine Le Pen (left of photo) and Emmanuel Macron (right of photo). Le Pen is a far-right Republican who wants France to gain power, which could mean possibly leaving the EU, while Macron is an Independent who would have France stay in it. Le Pen said to the EU about France’s borders, “I want to control the borders – They don’t belong to you”. It is up to France as to who will come to power, but either way, it will result in a great change in France’s policies. More information