The softball team won their first game of the season against Old Lyme on Monday, April 3.  They won the game with the score of 8-9. 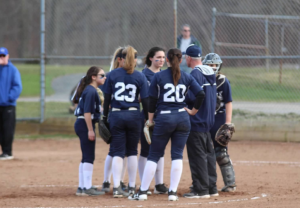 Girls lacrosse lost their first game on Saturday, April 1 against Old Lyme 14-2. One of the captains, senior Hannah Scarpace said, ¨Even though we lost we played probably the best team in the Shoreline and quite possibly one of the best in the state, and we played pretty well for not having any scrimmages and few outdoor practices. For me, the best part of lacrosse is being able to play a sport with some of my close friends and doing something I’m very passionate about.¨

The Morgan baseball team won their first game of the season on Monday, April 3 against Cromwell 2-0. They played their second game on Tuesday, April 5 against North Branford and won 11-4. One of the baseball captains, senior Cooper Thompson said, ¨I love baseball because I love to pitch, and it is something that makes me happy. I like to work and improve myself as a player and working with my team and just having fun at practice with all of the guys. It’s a really good group, and we have a chance to be great this year.¨ The baseball team is currently undefeated.

One of the senior captains of the golf team Burton Caldwell has been playing golf his whole life: ¨My favorite part about golf is being able to go walk the course and have a peaceful time in nature, while also competing against myself to shoot my best.¨ The boys’ golf team had a match on Monday, April 17. Jack Bugg had a score of 44. Burton Caldwell had a final score of 45. Ryan Powers and Olivia Powers- who also plays in the boys’ matches- both had a final score of 52. Morgan has a 1-1 record for boys golf.

Girls golf had a match on Tuesday, April 18 against Waterford. One of the senior captains of the girls’ golf team Lindsay Harden has been playing golf since her freshman year: ¨I love that the girls on the team are also my good friends, and I like how golf is mostly an individual sport, like a  you vs you thing but you also have the support of your team.¨

The boys’ lacrosse team had a game on Monday, April 3 against Old Saybrook. Morgan lost 11-1.

The boys’ tennis team had their first match on Monday, April 3 and lost against Old Saybrook 6-1. They won their second game against East Hampton 7-0.

It´s going to be a great season for spring sports. Go Huskies!