The students were assigned the delegation of Ethiopia. Each student participated in a separate United Nations committee. Ella was assigned th 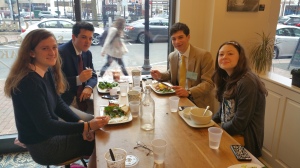 e African Union (AU), Dan was assigned Disarmament and International Security (DISEC), Sarah was assigned the World Health Organization (WHO), and Wyatt was assigned Economic and Financial (ECOFIN). The committees were broken up based on the type (for example, DISEC and ECOFIN are general assemblies which work together). The committees met all over Yale campus and parts of New Haven.

Sophomore Ella Franzoni who introduced the club to Morgan said, “being at Yale was really great because we learned a lot about the school in addition to actually being in committee. Being in committee was really scary at first because I was in a regional body, and it was very serious. It was a challenge, but it was worth it because it was engaging, and it was a really great time.” Ella said that she created the club because “Morgan has a great atmosphere when it comes to clubs…”

All of the students who went to  Yale Model U.N. had an excellent time and valued the experience. The club will continue next year, and members hope to go to even more conferences. If any students have an interest in participating, please contact Ms. Russell or any of the members mentioned.