Years ago, Morgan students could not get their news digitally, so how did they find out what was happening around them? With the help of Technical Education teacher Ted Enoch, English teacher Paul Serenbetz organized groups of journalists who created printed versions of The Morgan PawPrint. However, our school’s news source wasn’t always called the PawPrint, and was previously titled The Igloo and The Morgan Tower. There are articles, pictures, and interviews contained in these old newspapers that are very different from what Morgan’s journalists report on today. 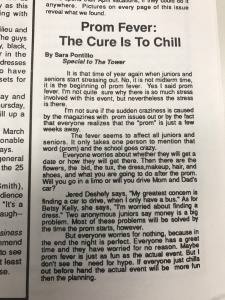 A 1992 issue of The Morgan Tower revealed what students looked forward to doing on spring break. Student Tim Hinckley said, “I would like to go to California so I could see all the girls on the beach in their bikinis.” This issue also mentions TCBY (The Country’s Best Yogurt), which was “an inviting little shop” on Route 1 in Clinton. TCBY made fresh waffle cones, Belgium waffles, and had a variety of yogurt flavors.

The 1998 issue of The Morgan Tower featured the article, ‘Baby Think-It-Over’ Teaches Morgan Students About Parenthood. The journalist, Amanda Barton, explains that “two high-tech simulator dolls by the name of Baby Think-It-Over were purchased to students to experience being a parent. Each Baby cost around $200.” In a featured section titled Nobody’s Perfect?, students and staff were interviewed about one thing they would want to change about themselves. Principal Bill Barney replied, “My wife says I should loosen up and relax, I’ve got to stop and smell the roses.”

To conclude this issue, Erica Rembisz wrote an article titled  “Any Suggestions For Improving the School?“Heather Hill, a senior at the time, responded that a smoker’s area should be outside of the school so that people would stop smoking in the bathroom. Sophomore Kristen Gorecki added that students should be able to play cards during study halls, as long as there is no gambling.

Mr. Serenbetz reflected on the printed versions of The Morgan Tower, explaining, “I remember when you used to have to type these things… maybe one word wouldn’t fit and it would have to be carried to the next page.”

He felt that besides getting the students to write the articles, another difficult task was writing stories that would be relevant for two months. “Because it was print like this, none of the stories would really be timely stories. If you did an article on the soccer team, everyone knew the scores of the soccer game. You had to teach them how to write what are called featured stories, rather than hard news.”

With digital news on the rise, Mr. Serenbetz claimed, “I think I would personally miss print journalism. If I couldn’t buy a New York Times, and if I had to read it on my phone screen, I would miss a hard copy.”

What came after The Morgan Tower and The Igloo? English Teacher Julie Frydenborg explained how the Husky Herald was created, “I was already doing the literary magazine and a lot of those same kids wanted to do a school newspaper…it was just an afterschool club.”

To publish the Husky Herald, pieces of legal paper were physically cut and photocopied. The stories were based on what really concerned the students, along with “a game page, a crossword…[and] there were occasional political cartoonists who came through.”

Ms. Frydenborg explained that one of her favorite articles “was where they asked the cafeteria ladies how they make Thanksgiving dinners here- It was exactly how you do it at home.”

Since 2012, Morgan has been getting its news from this online publication, The Morgan PawPrint.