The Morgan Boys Soccer Team is in it to win. Undefeated the team qualified for Shorelines and States. The first Game for Shorelines the boys won, but they lost their second game. Boys Soccer just finished states. They won their first game and lost the last game of the season. This soccer team is very confident and has a lot of positive energy when playing the game.

One of the coaches for boys soccer is very happy with his team and believes that they work well together.  Coach Christopher Rapuano said, “Soccer is an amazing sport regardless. Winning or losing its a team bond with unity and great brotherhood.” Just because the boys lost states doesn’t mean they will stop being a team that works hard and plays well together.

Just because the season is over doesn’t mean that the boys are done playing soccer. There is an in-door soccer league set up in North Branford, CT that some of the players might participate in and join. others might join winter sports such as wrestling, indoor track, and basketball. The coaches of the boys soccer team are providing a booklet during the soccer banquet of a weigh training program for a long off season in-order to lift to stay in shape until next season in August 2017.  Just because the season is over doesn’t mean the team splits apart. The Morgan soccer team will go in different directions during the off-season but will always be teammates. 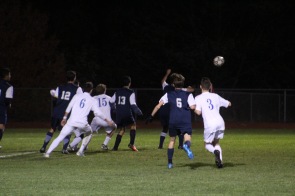