The SBAC, or Smarter Balanced Assessment Consortium, is the relatively new standardized test for all high school juniors. However, its proximity to AP tests, the SAT and the ACT is creating a lot of anxiety for Morgan Juniors.  Literacy Coach James Messina reported that some faculty members are fearful that students will not put forward their best effort on the tests.

Mr. Messina explains, “The SBAC is a way to measure how well Juniors are ready for college and careers, and it is one way to measure what students know, but it is not the only way. It is one piece to a very large puzzle on what students can understand and can accomplish.” 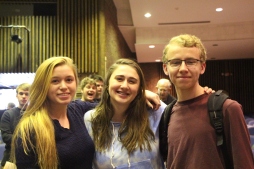 juniors to care about [the testing] because there are no true incentives. If I do well I do well, and if I do bad, I do bad.” Teachers are aware that some students feel this way and want to help support students so they can try their hardest and do well. The staff wants to alleviate some anxieties, but it is a challenge.

The SBAC testing, which replaced the CAPT, was administered for the first time back in 2013. But there are multiple issues with the new digital tests. Computer screens can be hard to stare at for prolonged periods of time and systems (especially here at Morgan) tend to “glitch out” causing issues with the tests.  Both Mr. Messina and Technology Support Specialist Jen Thayer worked hard to make certain that there would be no computer issues during the testing.

But those minor problems are trivial compared to bigger problems. Although the Juniors are the only ones being tested, the testing affects everyone in the school. There are simply not enough computers in our school for juniors to take the tests all at once, so a normal 3 day test, quickly turns into an 8 day nightmare. And as if 8 days of testing for juniors and a closed computer lab for the rest of us was not enough, the computer lab was also closed for everyone for an entire week prior. That is unfortunate.

But Morgan students should try their best nonetheless. “The tests reflect what happens here at Morgan and Clinton, and students should want to represent our town and school in a positive way. The scores will compare us to other towns around us and around the country. So have husky (Clinton) pride and do your best.” said Mr. Messina when asked how to motivate Juniors to do well on the tests.

Mr. Messina also said, “Another incentive is if we get 98 percent participation from our junior class, they will get a late arrival as reward”

After the testing, we asked some other Juniors about their experiences with the tests. Junior Austin Remetta said, “I took the first part seriously, but after that I just put random answers.” Because the test doesn’t really count for anything for the juniors, many are inclined to simply put random answers and not try at all on the tests.

But SBAC might be on its way out. In a recent article in the Hartford Courant, Connecticut officials recognize that Juniors are over-tested and instead of an additional test that doesn’t benefit the juniors personally (SBAC), they are working on replacing them with the SATs and ACTs, tests that already matter to juniors. Junior Maina Carey (middle in photo) said, “I think replacing the SBAC with the SAT will be good because the SAT has been around for a long time and clearly has worked for students before.” This is an idea that is shared by many students and teachers.

Although standardized testing is a drag, there are ways to make it more bearable. What do you think? Should the juniors have to take the SBAC in addition to other tests, or can existing tests serve the same purpose?