An Ending to a Successful Season 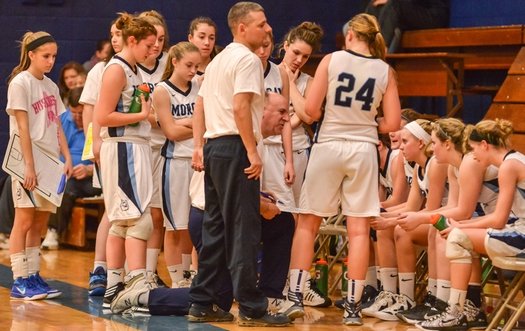 By Kate Driscoll and Amanda LaRiviere |

Despite tough competition in girls basketball this year, the Morgan Huskies are closing out a very impressive season. The team has only lost two games in total, one home and the other away. It is clearly evident that they have worked hard to improve.

We interviewed Kelsey Donaldson and Tori Hopkins, two captains of the basketball team, to get their insight on what’s been effective for the team during the season. “I have a lot of superstitions,” Kelsey replied, “I have to sit in the same spot on the bus, and put my knee pads on before the third quarter.” Tori said she also always sits in the same spot for away games. When asked about how the team has progressed over the season as a whole, they both agreed that, “We communicate better, and we know each others strengths and weaknesses.” The team has also appreciated the support from the school during games. Both Tori and Kelsey note that, “It’s been pretty good this year, much better than last year.”

Photo and featured image courtesy of the Harbor News

The Morgan girls basketball team has definitely had an impressive season so far. They played HK for their first game of the season, which accounts for their first loss, 49-42. Their second loss was to Cromwell, an intense game resulting in a score of 47-49.

The Huskies have outstanding games and stats. The Portland game was an absolute blowout with the Huskies winning 83-30.

Individual stats for the Huskies include as follows:

Sami Ashton is leading the team with an average of 3.1 steals per game, followed by Josie Sullivan with 2.3, and Kelsey Donaldson with 2.1. The season average so far is 15.0.