Leave If You Are Not A Senior 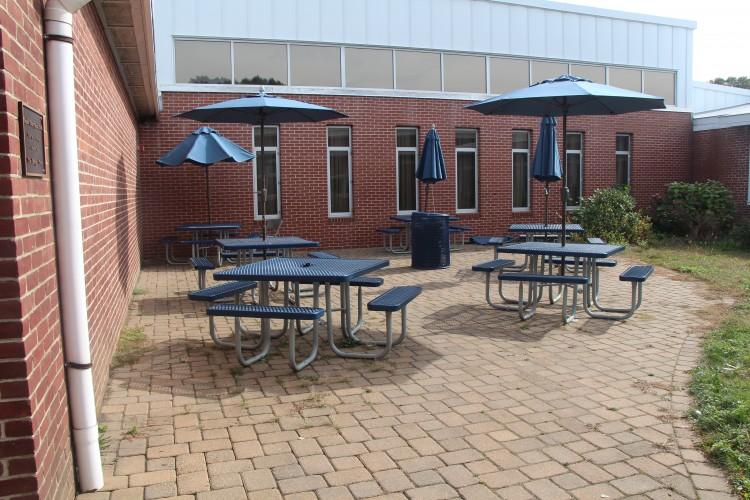 The senior courtyard has been around for years. Many students have benefitted from sitting outside with their senior class during study halls and lunch waves. Unfortunately, many underclassmen have been breaking the senior privilege rule and coming into the senior courtyard to eat lunch with their senior friends. As a senior, I wanted to investigate this issue, as many people have been complaining, and see what the senior class and other Morgan students think about this issue.

Liz Bradley explains, “I don’t think underclassmen should be allowed into the courtyard every day. I think once in a while it is okay, as long as they respect the seniors.” Sean Davidson agrees with Liz and says, “It’s okay if underclassmen come in the courtyard as long as the seniors invite them in.” Paul Michael Mullally says, ” I don’t think underclassmen should be allowed in the senior courtyard. When we were underclassmen, we weren’t allowed to go in the senior courtyard. Why should it be different for any other class?” Keeping this issue fair and under control is hard because there are so many different opinions.

Along with talking about the issue of underclassmen not being allowed into the courtyard, there was also an issue of who is going to control who comes in and out of the courtyard. Liz and Sean agreed with each other and said that adults shouldn’t get involved, and seniors should be able to figure it out. Paul Michael says,” Whoever is on lunch duty should go in and check halfway through lunch.” It only makes sense that the lunch duty teacher should control all aspects of where lunch waves are being held.

Also, in the beginning of the year, the janitors usually clean up the courtyard. They mow the lawn, pick the weeds, and set up the tables and umbrellas. For our class, this was not the case. We were told that the janitors would no longer clean up the courtyard for us, but we had to clean it ourselves before we could use it. So, a total of five members of the senior class came and cleaned up the courtyard by themselves. The tables were in bad shape; the umbrellas were broken, and weeds were everywhere. I asked a couple members of the senior class about this. Paige Mustaro explained, ” I understand why the janitors wouldn’t want to clean up the courtyard anymore, but if they did it for every other class, then I feel as though it would only be fair to do it for our class as well.” Sean Davidson said, “I think it’s unfair that we were forced to clean it or else we wouldn’t be able to use it. It should be our choice whether it needs to be cleaned or not.”

Lastly, multiple members of the senior class want to order food during lunch waves. Again, we were told by the school that this is not allowed with no reasoning behind it. I felt this was slightly ridiculous. It’s one thing to say no and give a real explanation on why we couldn’t order the food, but we were given no reason as to why we couldn’t. Liz Bradley explains ” Other senior classes have been able to order food in the past, and I could see how the administration would be worried we would abuse the privilege, but if no one abuses the privilege, it could work out perfectly.” Paul Michael says “We should be able to order food. I don’t think it should be an issue if we met the delivery man, or even had a teacher order the food for us. I would even be fine with having one set day a week so the main office would know when we were ordering food.”

This issue is very controversial. Every person I have talked to has a different opinion and way of solving this problem. In order to see what the students of Morgan think about these issues having to do with the senior courtyard, vote on the poll below! What do you think should happen?