The Morgan PawPrint • May 1, 2013 • https://morganpawprint.com/5545/politics/humans-are-more-dangerous-than-guns/

Humans are More Dangerous than Guns 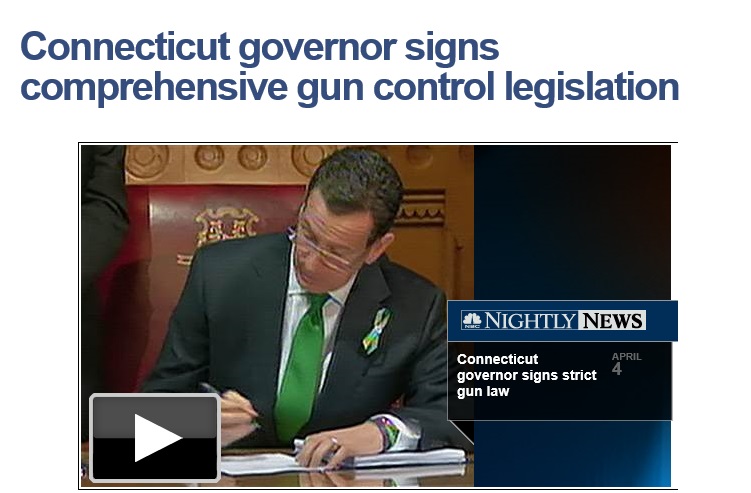 I want you to think back to events in the past year, events that you may have heard on the news, at home, or maybe even in school: The three main topics that our country thrives off of violence, drugs, and crime. The news is filled with negativity and puts the spotlight on the bad within society. All three topics seem to intertwine with one another, but Connecticut decided to put the blame on one aspect when it comes down to the violence … Guns.

The Batman Premiere shooting and the Newtown School shooting were two of the most memorable mass murders that happened in our country this past year. Adam Lanza, the shooter at Sandy Hook killed 26 victims within five minutes, twenty of them being elementary students. Lanza used a Bushmaster AR-15 Rifle to shoot his victims and Sig-Sauer 9 mm. handgun to shoot himself afterwards. This mass murder is the second deadliest mass shooting in American history, The Virginia Tech Massacre in 2007 being the first. The legislation of gun control was immediately questioned and under renovation in Connecticut after this fatal incident. April 4, 2013 the new gun laws in Connecticut were passed.

In the opinion of Connecticut Governor Malloy,”We have come together in a new way that relatively few places in our nation have demonstrated an ability to do.” Of course the governor himself whose choice it was to pass these laws would think such greatness of the “improved” gun laws. A lot of people agree with these new laws too. For example, Mrs. Chausse said,    “I support the new gun law.  I do not understand why anyone needs to own an assault rifle or large capacity magazine clips.  Universal background checks also make sense to me.  We need to keep weapons out of the hands of people who may be mentally unstable or who have a criminal record.”

In the last sentence of Mrs. Chausse’s statement, she touches upon the aspect of mental health.  In my own opinion, people who are motivated enough to get a gun in their hands will manage to do so. I agree that large capacity magazines should not be in the hands of people or in reach of people who have no reason to own one or no training in how to properly use it (military, etc.).  I see this problem very similar to that of illegal drug pushing. It is all street related, and just because you make a drug illegal doesn’t mean people who want them won’t be able to get their hands on them. We are taking guns from society, but leaving them in the hands of criminals. How is that any safer? I feel that people are more of the problem and that we as a society need to focus more on mental health in schools and put more attention on that, rather than all the attention on guns. Yes, if people don’t have the access to the guns part of the problem is solved, but again, if someone mentally unstable wants to get a gun, they will be able to with enough drive.

I lived in Fair Haven, on the line of East Haven, with my father for a couple years and later on went back and forth between his house and my mother’s. The East Haven and New Haven area has recorded more homicides in the past couple of years than Hartford, which is known for a lot of gun violence. Just from living in an area as such, it was easy to realize how easy access is to drugs, weapons, etc. The New Haven and Hartford area is nothing compared to cities outside of Connecticut and the issues of guns is worldwide. As I said before, if somebody who is determined enough to get a weapon for whatever reason, the opportunity is there, legal or not.

Another English teacher here at Morgan, Mrs. Gallagher who also lives in the New Haven area voices her opinion, “It’s a travesty to the American people!”

Think of it as a theory every teenager goes through at one point or another with their parents. It’s a rebellious time in your life, so when someone tells you not to do something that inner drive in you makes you want to do it even more. It’s just human nature, it goes for everyone whether people want to admit it or not, especially if it’s something you really want to go through with. In the case of taking guns away, it is more extreme, yet the same concept. You can read any article on the web and see the uproar from people who strongly believe in the second amendment and their rights to being able to obtain a firearm.

As Mr. Gersz voices his opinion, “We don’t need heavy rounds. The true issue is why people feel the need to use them on others. These weapons have been around for a while and this hasn’t always been the case. Everyone could have a shotgun to protect their home and to hunt. They can’t be concealed or create mass casualties. Humans are more dangerous than guns.”

Gersz also agreed with me that mental health is the problem. Guns do not shoot by themselves; it is the people behind them that cause the problems. As I stated multiple times, if people want a gun, or anything illegal for that matter, they can still get their hands on it. Have lived in Fair Haven, from personal experiences, I can vouch for the part of society that claims that criminals will do what they want and truly have no care. It is a business for them and as long as they get their half of a deal, the law is not going through their mind.

Not only is it a business for the criminals who will continue to distribute guns illegally, but it is a business for gun manufacturers who do so legally. By banning over 100 different guns,  the government is taking money away from the  manufacturers;  “When we know the common denominator in the mass killings of recent years has been the mental instability of the perpetrator, we have yet to hear any proposals to address this great failing in our society.”

To sum it all up, Mr. K put it into the perfect words, “The concept is positive, but there seems to be some loop holes.” Everybody will have their opinions on the new gun laws, but it will still remain an issue, and that is something everybody can agree on.