How the Juul is Spreading Through Schuuls 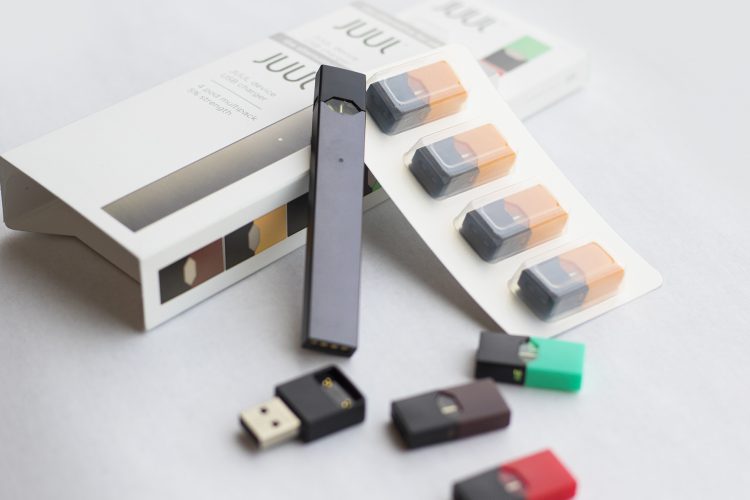 Vaping has become an epidemic in American high schools. Truth, an organization dedicated to preventing the use of nicotine and tobacco products, states that as of 2017, 11.7% of high schoolers in the United States regularly use e-cigarettes. Teen e-cigarette use has grown almost 75% in the past year, with the percentage of teenagers who use e-cigarettes estimated at 20%, which constitutes almost 3 million high schoolers, according to CNBC.  In almost every school across the U.S., students are hearing stories or seeing kids using products such as a Juul, the number one electric cigarette brand in the country.

The company was only founded in 2017, which is shocking considering its popularity. The company was allegedly created for aiding adult smokers in their journey to quit smoking cigarettes. On the “Our Mission” page of the JUUL website, Juul claims its purpose is “to eliminate cigarettes by offering existing adult smokers with a true alternative to combustible cigarettes.” They make very clear on their site that they do not advise nonsmokers to begin using a Juul, and yet the epidemic continues to spread among teenagers. Their site is also monitored by a question of “Are you 21 or older?” If the answer is no, the site prevents the person from viewing the site.

Due to its popularity, the term “juuling” has become synonymous with vaping. Its popularity is also subject to a lot of scrutiny from organizations such as the National Food and Drug Administration (FDA). According to a TIME Magazine report, JUUL and other electric cigarette companies are having their marketing procedures investigated, as the FDA believes these companies purposefully market towards teenagers and young adults with their wide variety of flavors. The companies claim otherwise, but it is undisputed that the flavors do appeal to teenagers.

Joseph Allen, an assistant professor of Exposure Assesment Science at Harvard T.H. Chan School of Public Health, believes that “e-cigarettes are a gateway for traditional tobacco use for many young kids.” Despite nicotine warnings on the boxes of e-cigarettes, many users are still not aware of what is in a vape.

In schools, products like the JUUL are easy to conceal, as they are small and can be slipped into a pocket quickly. The commonplace for vaping in high schools are bathrooms. In many schools, the administration is taking notice. Suspicions of vaping arise from groups of students walking into the bathroom together, more often male than female, as interpreted by the perspective of students. In some instances, teachers or other administrators will follow students into the bathrooms to “catch them in the act.”

Assistant Principal of Morgan Tyler Webb has asked that teachers use the student bathrooms in order to make sure that there are no students vaping in the bathroom. Throughout the day, staff will monitor the bathrooms as well as walk through the hallways to watch who is going into the bathrooms. The staff also tries to find patterns with who is going to the bathroom and when if it is consistent enough to become suspicious. He states that it is not based on gender, as the students believe.

When staff suspects a student of vaping or having a vaping device, they have the ability to call them into the office and search their belongings. This is different from a police search, as there is no warrant necessary, only probable cause.

As said, it is estimated that 20% of high schoolers in the United States use e-cigarettes. Here at Morgan, Clinton Prevention Coordinator Kelley Edwards (Clinton Human Services) takes polls during the fall and spring about substance abuse among Morgan students. As of spring 2017, 21.2% of students had used an e-cigarette in the past 30 days, 10.6% had used between one and five times, and 10.6% had used more than six times. Of the 109 students who stated that they vaped, 91.7% said that they vape flavored liquid over tobacco or marijuana.

The 36.6% of students who stated that they had vaped before overwhelmingly said that the way they began vaping was being offered by friends. This shows that there is a pyramid scheme in regards to the number of students vaping increasing from earlier this year. It begins with one student, and then it spreads to their friends and their friends’ friends. And even if a student themselves did not vape, an overwhelming majority of 89% said they knew somebody else who does.

Another key factor when it comes to vaping is the safety of it. Truth has run campaigns including the message “safer isn’t safe” when it comes to vaping. While vaping is technically safer than cigarettes, there are still significant amounts of chromium, nickel, zinc, and lead, which increase when the e-liquid is heated and turned into a vapor. These chemicals are very harmful to the body, especially lead.

The majority of student who participated in the survey believe that vaping isn’t safe. Many students said that they believe that health problems can arise from vaping just like smoking, even if it is technically “cleaner.” There is little currently known about the health effects of e-cigarettes, as it is a relatively recent form of taking in nicotine.

There is no denying that vaping is an epidemic in America. The millions of high school students using e-cigarettes have made that abundantly clear. As of right now, there is no end to the spread of e-cigarette use in the foreseeable future. There may be no way to control the spread of e-cigarettes like the JUUL from reaching teenagers beyond the United States, like the UK and Israel. All that is possible right now is prevention. With the information available on the internet, teens have the ability to be more aware of what they are putting into their bodies. At Morgan, REACT will be launching a vaping awareness campaign to show the effects on the body with the goal to prevent users from growing among students.