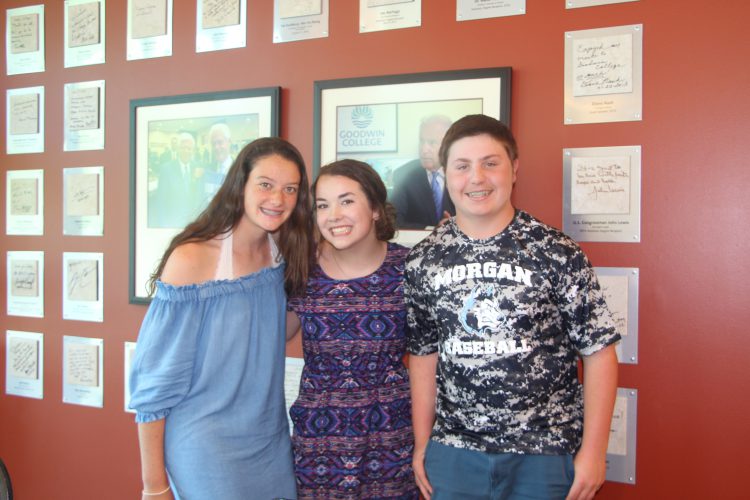 On Wednesday, May 23rd, the Fox61 Student News Program held its awards ceremony at Goodwin College.  Twenty-five videos were nominated for the five scholarships awarded at the event. One of these nominated videos was Easing Stress with Therapy Dogs, a video created by Sophomore Sydney Fratamico in Journalism.  The video was nominated for the CHESLA/CHET Higher Education Scholarship along with 4 other video

Sophomores Jillian Crowley and Logan Smith attended the event with Sydney and English Teacher Leslie Chausse and Heather O’Brien.  Before the ceremony began, attendees enjoyed refreshments, a photo booth and a chance to watch all of the videos produced this year for  Fox61

Student News.  The Kindness Revolution created by Jillian and senior Abby Pitarra and The Morgan School Swooshes for Change created by seniors Lily Cummings and Sophia Muce appeared on the big screen during this portion of the event.

At the awards ceremony, news anchors including Keith McGilvery and Audrey Kuchen presented the scholarships and posed for pictures with students. Even though Sydney did not win the scholarship, it was an honor to be nominated for the award.

Earlier this year Sydney and classmates in the first semester of Journalism attended a Fox61 News event honoring Jillian’s and Abby’s Kindness Revolution video.  The Fox61 News program is a great opportunity for students to showcase their talents while exploring journalism. Fox61 anchor Audrey Kuchen began her career in journalism with the Fox61 Student News program when she was a student in Madison, Connecticut at Hand High School.