In 2012,  Swoosh for Change was introduced to The Morgan School by the Class of 2014. PaulMichael Mullaly, other students in our class, and I created the event with no expectations in mind. When about 200 people showed up to support Swoosh for Change, we were overjoyed. When asked How the idea of Swoosh for Change came up, PaulMichael Mullaly said, “We needed a school-wide event that united the community and local businesses and gave back to a cause in need. Swoosh for Change not only unites students and staff, but is an exciting event that get’s everyone pumped and full of school spirit.”  Since then this charity event has grown leaps and bounds! That’s right, Swoosh for Change is back again for the second year in a row. The event is set to kick off at 6:30 in Gym A at The Morgan School on March 14, 2013. The highlight of the night will be watching The Morgan Students duke it out against their toughest rival, The Morgan Faculty. Tickets can be pre-ordered during lunch or by contacting PaulMichael Mullaly via phone, Facebook or twitter. Tickets are $5. T-Shirts with the new Swoosh for Change logo will be sold along with blue or white bracelets for a $1. If you pre-order your ticket you will receive a free Swoosh for Change bracelet!  There is a halftime performance by Summer Came Slowly featuring fellow Morgan students Paige Pellegrino, Lucas Edwards, and Kevin Moran.  There will also be a special performance, by Lucas Edwards, dedicated to the 26 lives lost during the Sandy Hook shooting. The point of Swoosh for Change is to give back to the community. Therefore, half of the total proceeds go towards the Charity of choice. This year the charity chosen was the Chase Kowalski Foundation. Chase Kowalski, a 7 year old who attended Sandy Hook Elementary School, was a victim in the December shooting.

Check the video below to see what other students and staff think about this year’s event! 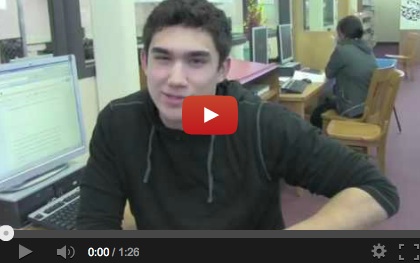