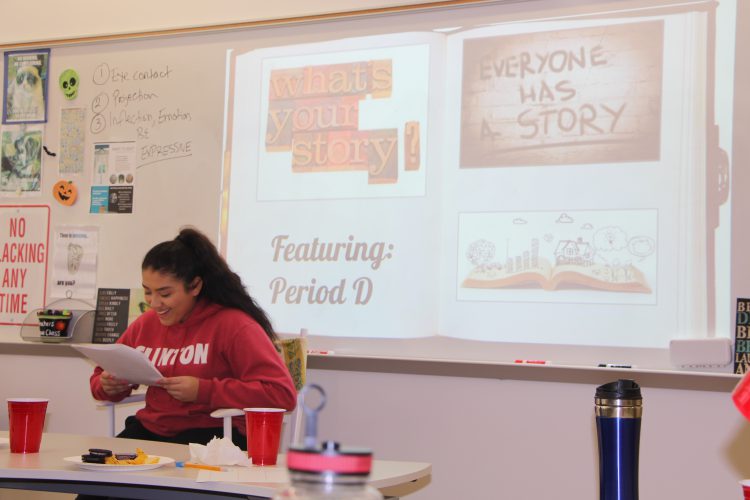 Each year, Clinton Parent-Teacher Association (PTA) holds a Reflections Art Competition for students in Eliot and Morgan which is associated with National PTA Reflections Art Competition. Local Clinton winners advance to the State competition which can advance into the National level. The theme for 2016-2017 is: “What is Your Story?”. There are general rules and submission guidelines to be followed and the submission deadline is November 23, 2016.

English Teacher Amanda Fairbanks’ Sophomores in English 2 have put together their own PTA assignment in class. The students enjoyed a coffee shop related theme during their presentations. There was a high chair set up in the front of the room with a display projected behind them on the whiteboard. Additionally, there was quiet music occasionally playing in the background, and  there was an assortment of different snacks and beverages offered to the class.

Students’ presentations varied from poems, short stories to personal essays which also helped students with their theme of identity. The audience within the class also paid close attention to the presenter and offered feedback on each piece.

Sophomore Abby Jasinski wrote a personal essay about the influence Michael Jackson had on her. She devoutly spoke about the day she heard of Mr. Jackson’s passing on June 25, 2009, and how this caused her to become more open to thoughts and actions of her daily life. After rigorous research on Michael Jackson’s lifestyle, Abby said she “Would’ve given up dance if it weren’t for him.” and he has helped shaped her into a better person and dancer.

Sophomore Dylan Schrempp also wrote a personal essay about the time his father surprised him and his siblings with ATVs while they were in Joel. The triplets were so excited to receive this gift as it was something they would appreciate for the rest of their lives. The whole family also travels to other New England states, especially New Hampshire. Up there, they ride through trails specific for ATV’s. The Schrempp’s really enjoy the thrill from riding around, feeling the wind against their skin and ripping up some dirt.

All Eliot and Morgan students are encouraged to participate in this year’s competition! Your story could win so enter while you can. Don’t forget the deadline is November 23.