A Night To Dismember 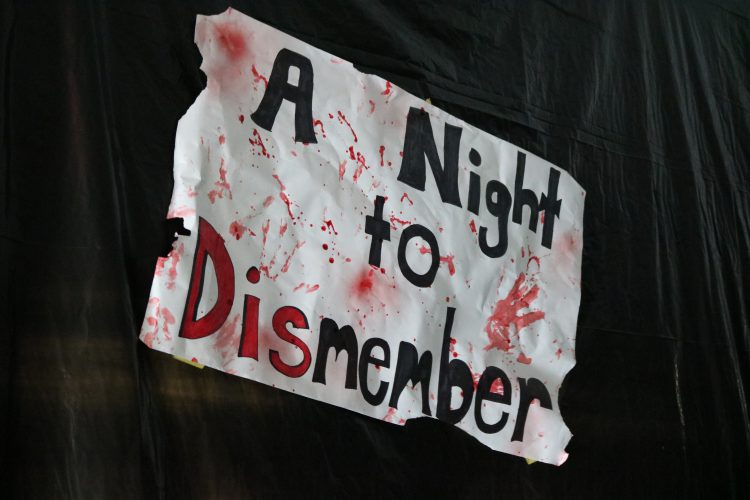 Written and Pictures by Natalie Buchetto|

On Sunday October 30th Morgan REACT hosted their annual Haunted Hallways. This year’s theme was classic horror movies featuring zombies, The Purge, Carrie, Jaws and Scream. I took a walk through the hallways to see the horror for myself.

My group first entered into the zombie courtyard where there were zombies surrounding us. The zombies said, “turn around.

Don’t go in!” That in itself was enough to already scare me, and I had four more hallways to go through.

The next of the hallways was The Purge. We entered into a small room where masked people stood silencing us. After banging on the doors, they allowed us in. Once we entered clowns and masked people surrounded us yelling and jumping out to surprise us. They followed us down to the end of the hallway where one boy kept saying, “who’s next. Is it you?”

The third hallway was Carrie. The hallway was designed to mimic the prom scene from the classic horror film. We were greeted by a prom photographer who showed us a couple taking a picture; screaming, the couple was dragged back by a bloody student. As we progressed through the hallway we finally see Carrie. Carrie was dripping in blood, and she was screaming with horror while a strobe light illuminated her.

Jaws was the next hallway. My group was greeted by a lifeguard who, as we got closer to the exit, screamed, “shark!” Right after he screamed shark, many beach goers ran up beside us screaming for help.

The last hallway was Scream and the name says it all. There was a lot of screaming happening in that hallway not only coming from me, but the characters as well.

Morgan REACT exceeded my expectations and did an amazing job as usual. REACT over did the amount of people that attended and amount of money made from last year scaring over 300 people and raising more than $735.00.