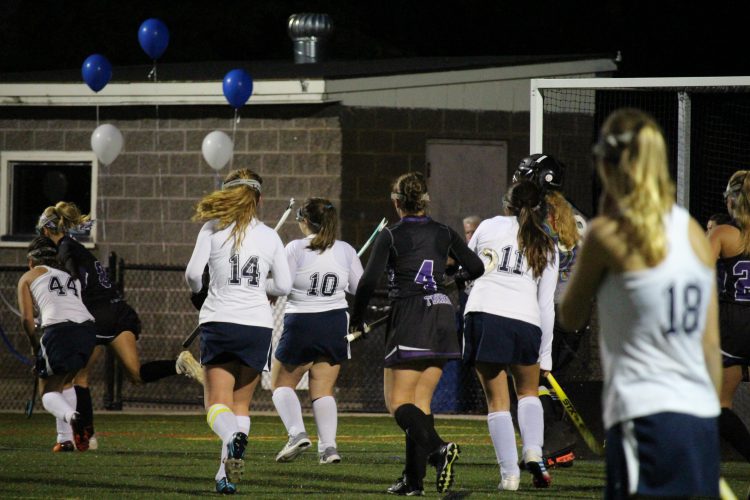 On Tuesday, October 11th, the Morgan Girls Field Hockey team had its annual senior night to congratulate the

seniors on their hard work. The previous year the Huskies won against Somers High School. This year the Morgan Huskies faced the North Branford Thunderbirds. The game was held at Indian River Sports Complex at 6:30. The seniors this year are Sofia Sicignano, Hannah Gaudet, and Aubry Allen.

The field was decorated with streamers, balloons, and posters for the seniors. Before the game, there was a ceremony held for the seniors. Their names were announced and they walked out as the crowd cheered.

When the second half started, it didn’t take long for North Branford to have possession of the bal

“Senior night was perfect thanks to the underclassmen on the team as well as the dog pound,” said Senior Hannah Gaudet. Senior Aubry Allen said the team did, “amazing and did such a great job decorating. I loved it!” She said it also “made me sad because I thought it would never be my turn to walk out on the field for those announcements.” Senior Sofia Sicignano said senior night, “exceeded all my expectations. I’m so grateful to have such an amazing team that I get to be a part of. I’m going to miss everyone so much!” Although the girls didn’t win the game, they still all enjoyed it.