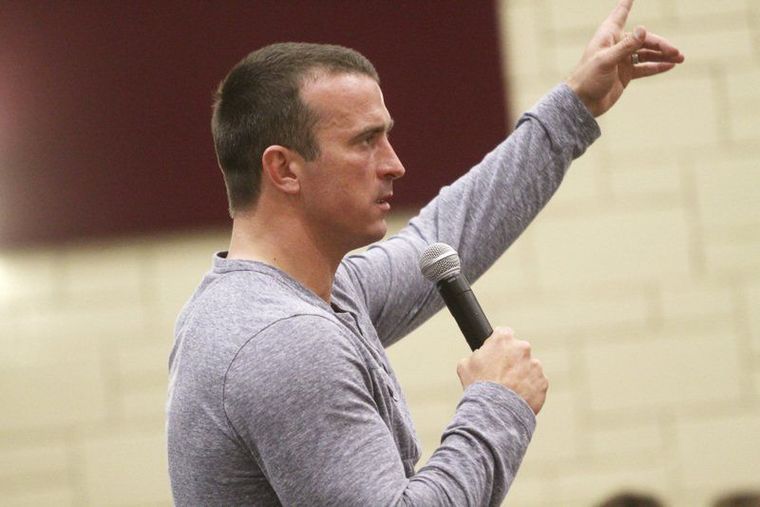 In the year 2011, Former Professional Basketball player Chris Herren created THP Project Purple after Herren spoke at a local high school. According to THP Project Purple website, Herren noticed a group of students in the front row wearing purple shirts. After finishing his presentation, one of the students in purple shirts stood up to speak. Although her classmates laughed at her, she thanked Chris Herren and spoke for the students in the front row, also known as the sober students.  She shared how each year these students take the pledge not to use drugs or alcohol. Chris was impressed with her courage to speak. He liked the symbolism of the purple shirts and what it meant to them. This event inspired Chris to send this message to adolescents across America by sharing his story and using the color purple to promote the message.

According to Clinton community member and parent, Kim Inglis, THP Project Purple ” is a national initiative created to increase awareness and educate the public about the dangers of substance abuse.  The initiative is directed at middle and high school students to help promote good decision making and a sober culture within schools.” 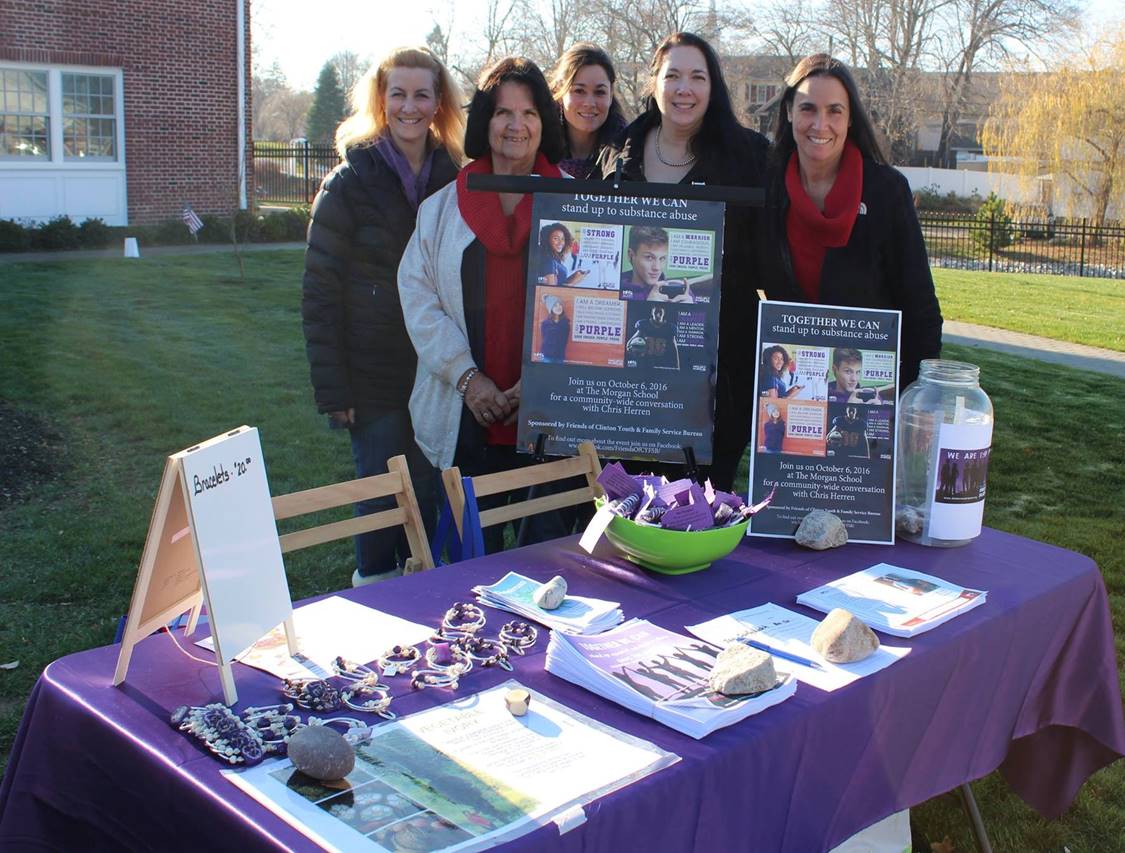 Mrs. Inglis said that Chris Herren was an All American and All New England high school basketball player who played for Boston College and Fresno State, and was later drafted by the NBA as a Denver Nugget.  He also played one season for the Boston Celtics.  He struggled with substance abuse his entire basketball career and is now a motivational speaker and sobriety advocate.

He founded a basketball development company called “A Hoop Dreams” and “The Herren Project”, a non-profit organization dedicated to providing treatment navigation and educational programs to anyone affected by addiction.  He’s written a memoir, Basketball Junkie and received 2 Emmy nominations for his ESPN documentary Unguarded.  He has also been featured on ESPN’s 30 for 30 Series and several national news organizations across the country.

THP Project Purple has a list of nine beliefs that  support students standing up to make a difference. They also want to give “students motivation and support as they embrace a message of education and awareness.”

Principal Keri Hagness first heard about THP Project Purple when it came to her hometown of Guilford. As a parent who has children in the school system, Mrs. Hagness saw how the community came together to prepare for this event and how it affected not only the students, but everyone in Guilford including parents. Mrs. Hagness wants to spread that message that THP “Project Purple is more than ‘don’t do drugs’. It is meant to show how devastating drugs can be to someone’s life. Project Purple is a support system for those who choose to live a drug free lifestyle because it can be very difficult considering the temptations not only in high school but also in college.” Mrs. Hagness realizes that drugs are a part of growing up and that dangers do exist for everyone. She wants to raise awareness for not only the students, but also the parents and the rest of the community.

So, why bring THP Project Purple to Morgan? Mrs. Hagness explained how students and families can fall prey to drugs that can take over their lives. As a family and community we can handle this problem. Morgan wants to help those who want to stop and also to prevent those who want to experiment. Although the actual Chris Herron assembly is not until October, there will be a kickoff assembly tomorrow, Friday, January 29th. Mrs. Hagness wants to get the message out so that students are on board with what this means to Morgan. Also, since the seniors won’t be able to see Chris Herren next year, it will  be a way for the seniors to know what it is about and learn a life lesson before going to college where the temptations are stronger. Eliot school will  be having an assembly later in February.

After asking some Morgan students if they have heard about this project, many said no. Once they understood the concept  they felt it was a good cause. Freshman Angelyn Graves said “Chris Herren’s story was very moving, and it is important for teenagers to understand the dangers of substance abuse.”

In January of 2015, it was estimated that over 500,000 students, politicians, sports figures and teams nationwide supported THP Project Purple Initiative. This Initiative has been going on for three years and has seen tremendous growth. It is thought that THP Project Purple has the potential to become like the pink of Breast Cancer Awareness.

Chris Herren will be speaking to Morgan students at the new high school on Thursday, October 6, 2016.  During the evening on the same day, he will be sharing his story and journey with the entire community.  He will also be speaking to the Jared Eliot Middle School students the following day. Friends of Clinton Youth and Family Service Bureau is organizing and sponsoring this event, with the help of several other organizations.

Mrs. Inglis said “We have met with and have the support of Keri Hagness, Laura Luther, Jack Cross, Clinton’s School Superintendent, Bruce Farmer, our First Selectman, the Board of Selectmen, and the Clinton Police Department.  They are all very excited about hosting Chris Herren in Clinton and implementing THP’s Project Purple.  Several youth sports organizations, school support groups and local businesses in town have already pledged financial support for which we are extremely thankful. 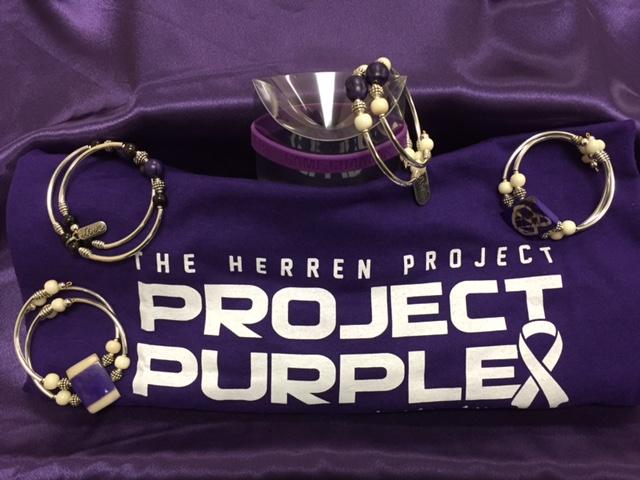 Our goal is to involve the entire community in this event, and “paint the town purple” when Chris visits Clinton in October.” Mr. & Mrs. Luther will be helping us introduce this initiative at a school assembly during THP’s National Project Purple week at the end of this month, and we could not be more excited.  We believe that every student can be a “Game Changer”. This motto will be on the bracelets that each student will receive at the assembly.

Additionally, Town Pride will be help fundraising by donating twenty percent of its profits on January 29th and 30th. On Friday January 29th at Clinton Parks and Recreation at 7:00pm, THP Project Purple group is holding a Benefit Paint Night with Cindy Stevens. The cost of the benefit is $35 per person. Light refreshments will be served. All proceeds will go to A Conversation with Chris Herren, the Clinton event that will take place on October 6-7, 2016.