Through The Eyes of a Student Representative 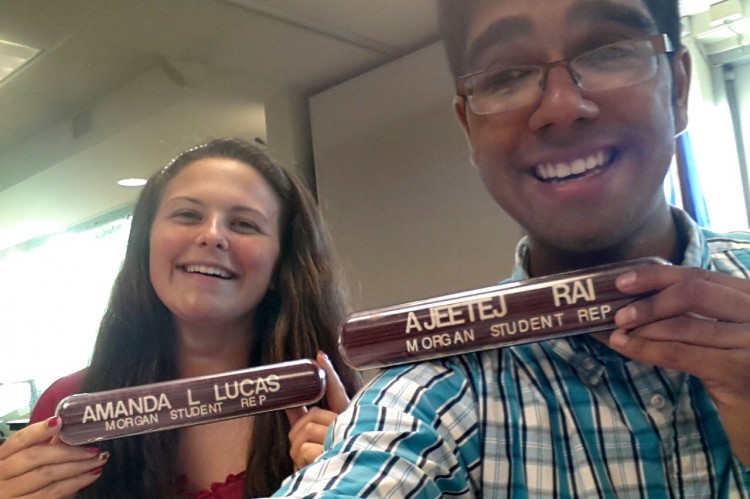 I started out freshman year confused, socially awkward, and very quiet. Throughout my freshman year, I felt alone and always out of place at The Morgan School. I was never achieving what I wanted to achieve. I had voice, but I never used it because I was afraid that people would not want to hear me. That feeling held me back from making the difference I wanted to make.

Freshman year, Mrs. Chausse would always attack us with the fact that we only have 2 million minutes of high school and high school activities. She would remind us on a daily basis that we should be doing our very best on each assignment that was given to us. I began to think, I really don’t have a lot of time at The Morgan School, so I need to start changing. Following this epiphany about my life, I started changing my attitude and perception of everything. I began to think that I needed to be the difference I wanted to see in society.

It was towards the beginning of junior year that I was given the opportunity to have my voice be heard. Out of nowhere, I decided to apply for the student representative position on the Board of Education of Clinton. Mrs. Hagness was the first person to say that there is a leader in me. After being reminded again and again to fill out an application, I did. A week later I was summoned for an interview. In that interview, Mr. Cross said that he saw so much potential in me, but when he said that I felt as if I wasn’t going to receive the position. I found a few days later that I did receive the position, and I knew from that point forward someone out there in this world filled with 7 billion people saw me as a leader.

I see myself as a different person now because of the opportunity to represent the student body. I’ve opened up and become a better adult. I have been able to grow as a leader. While on the Board of Education, my opinions were heard, and some issues I brought up were heard too.  I also gained the knowledge and began to understand how a schools system works.

Amanda Lucas, a graduating  senior at The Morgan School, has served one term on the Board of Education. When asked how being  a  student representative affected her, she stated, “The opportunity and experience I have had being a Morgan representative on the Board of Education has been such a blessing in my life. Never in my childhood did I ever imagine the things that I have learned about my fellow peers, The Morgan School, the wonderful community of Clinton, and even myself.”  As a result of being a student representative, Amanda has decided to pursue pre-law in government and wishes to return to the board as an adult.

Junior Shelby Memehet had the same experience as me.  She was a quiet girl who refrained from having her voice heard, but when given the opportunity to speak, she made her opinion on certain matters clear. When asked how this position has impacted her, she stated,”Being on the BOE has helped me become who I am now because it allows me another chance to make a difference.”  Being on the board of education has also helped her understand the process of a school system, “It has also made me aware of how the decisions are made and how the BOE is structured and run.” This position has helped her become who she is and helped her understand the structure.

Shelby Church, a former student on The Board of Education, had similar experiences. She explained to me how being a student representative helped her understand the process of decision making of the board. She stated, ” It gave me the opportunity to share with the board the students’ viewpoints on certain issues. It helped me make connections I might not have otherwise made, connections that will make a difference in my future career as an educator.” Being a student representative was an amazing experience for her allowing her to open up and helping her understand more about the school system.

I started my 2 million minutes at The Morgan School as someone who hated socializing, standing up in front of people, talking out loud and presenting. It’s weird to think that I changed so much because now all those things I listed I do everyday in meetings and in presentations to town officials.  This all happened because I was offered an opportunity to be the voice of Morgan.