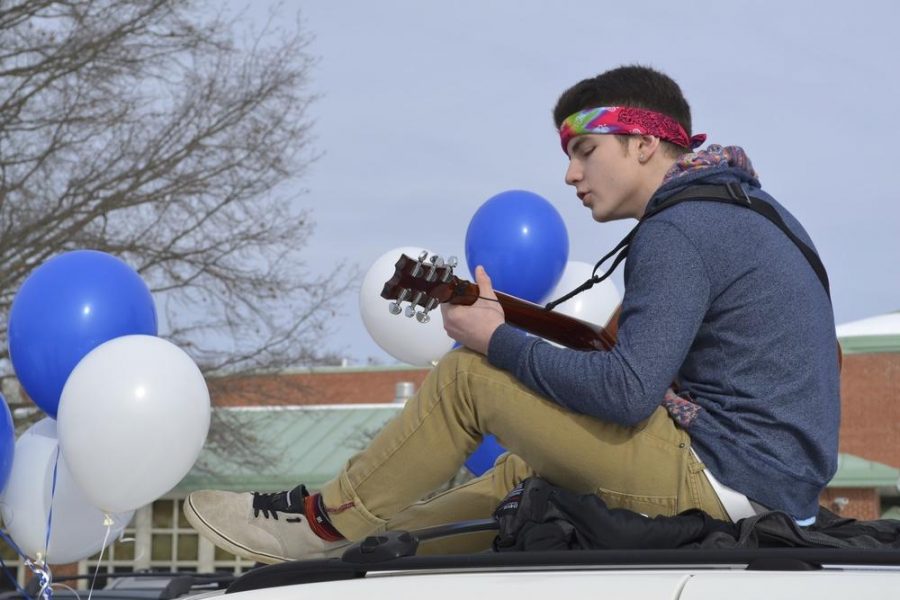 Here at Morgan, we have several students who enjoy music enough to try to create their own. I talked to Senior Aj Rai, Senior Kevin Moran, and Junior Joe Luchuck about their musical endeavors.

Senior Aj Rai began singing in fifth grade and continued on until the eighth grade.  He sings for the choir at his local church, and he records his own songs at School of Rock in Madison. He told me that he started to record music after his vocal teacher told him that he should go to his studio and try his hand at recording. He also plays the flute, piccolo, and piano. His inspirations include Miley Cyrus and Parachute, both of whom he admires for their music and their success. AJ has written two songs, but he usually does covers of other artist’s work. Unfortunately, AJ refuses to release any of his music to anyone. If you would like to hear his music, please tell him!

Senior Kevin Moran started drumming at the age of 10 because his best friend played the guitar and wanted someone to play with him. His friend taught him the basics, but he learned the rest on his own. Kevin is a member of the Morgan chorus and is in a band called Summer Came Slowly, a “pop punk” band. He told me that they practice at least once a week, anywhere from two to five hours. Moran explained that Senior Paige Pellegrino “wanted to start a band, and I joined because they were looking for a drummer.” I also asked him how he came up with the name for the band. He said ” I was watching a movie once on HBO, and at one point, the screen said Summer Came Slowly.” After adopting the name, they performed four shows around CT.

Although he is in this band, he has performed alone before. His first time was at an Eliot pasta night when he was in 6th grade. Kevin also told me about his love for writing. He has written four full songs and at least fifteen choruses. When asked who/ what inspires him to make music, he said “Older music. Older music gave me my style of drumming, and I don’t like a lot of current music. One band that I do like now though is The Wonder Years.” Kevin told me that “drumming gives [him] positivity. It’s something I like to think I’m good at, and it makes me excited.”

Junior Joe Luchuck is better known by his stage name Chuk J. Joe is a rapper/ producer who began making music years ago out of a home studio in his room. Since then, he has recorded two mixtapes and a variety of songs. He just released his first studio album D.ayD.reaming, which includes 13 tracks. The whole album was written and produced by him and is available for download on his website; Chukj.sqsp.com, SoundCloud, and for purchase on itunes.

When asked about his beginnings with music, Joe said “In eight grade I was already infatuated with the idea of music and spreading my messages and ideals and just the pure addiction of attention. I remember I used to and still do see videos of concerts and would get butterflies knowing that one day that could be me. And since then I have just been hustling.” When asked what inspired him and what still does inspire him, he said “Definitely a lot of musicians and rappers, bands, way to many to count. I am inspired by people and their stories whether they are fake or true. I kind of just go with life and find inspiration and that’s what keeps me going and makes me do everything I do.”

All of this inspiration has formed into a collection of new and old elements, which Joe displays within his songs. His sound is incredibly unique. I asked Joe what genre of music he creates, in his opinion, and he had this to say; “I have created my own genre called electric vibes, but if I was to put that in lay mens terms it would be alternative hip-hop mixed with psychedelic and soulful instrumentals. His latest album D.ay D.reaming is a very new sounding collection.

I wanted to know more about his inspiration. Luchuk explained, “I was thinking of my next project, and I had ideas and thought hard about what it could be. It was difficult to kind of find a name that’s original and versatile with its meanings yet so specific with my ideals and vibrations I try to deliver with my music and dreams came along. From there I thought daydreaming works perfect, and the acronym of the d’s allows me to put out the full perspective of it all, Distant, Divine, D.ay D.reaming.

Will we ever see this three talented students in the spotlight? Hopefully!