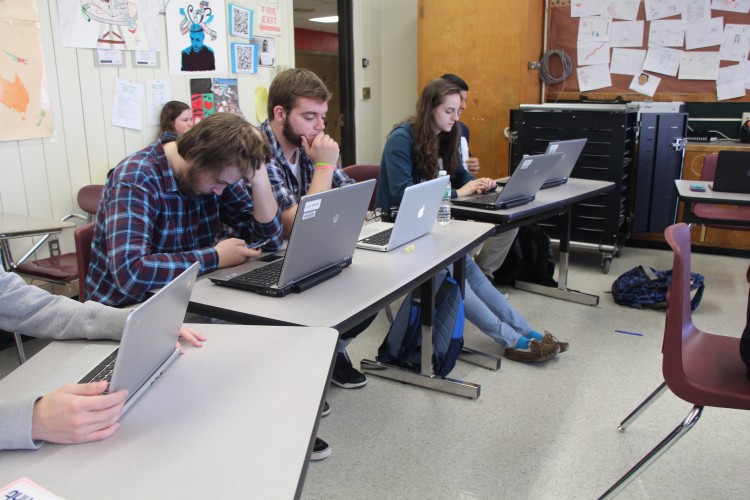 The Clinton Public School system gave a warm welcome to new IT director, Frank Rossi, about two months ago. An IT director (information technology director) is in charge of technology within an organization, such as The Clinton School district.

Before Morgan Mr. Rossi worked at Notre Dame in West Haven for the last fifteen years. He began his career at Notre Dame teaching business and computer classes before ultimately becoming the department chair. For the last two years, he served as the school’s Director of Technology, which is a similar position to this one except Clinton Public Schools is a larger district. Also, prior to becoming Director he served part-time as the school’s Assistant Director of Technology for about five years. I asked Mr. Rossi how this prepared him for the challenges of Clinton’s technology, and he said, “The job responsibilities are pretty similar in that they’re both centered around strategic planning related to professional development, hardware/software implementation, and long-range goals.  We recently underwent a building project of our own where technology was at the forefront.  I learned a lot about the building process and am excited to be a part of the ‘new’ Morgan.”

We all know making the transition from one school to another is full of meeting new faces and learning everything possible about  the building and the people who learn and work there. Mr. Rossi has only been here a short two months, but he has been able to visit each of the school buildings, including The Morgan School. I asked him what changes he plans to make with the school district’s technology, and he said, “The place I’d like to start is by helping the district create a strong, consistent vision so students can grow with the technology from the time they start at Joel to when they graduate from Morgan.  I constantly ask the question, “what can we do as a district to better prepare our students for what they will face beyond high school?” “I don’t know if there is one true answer, and with technology, that answer is always changing,” Mr. Rossi promised.

Technology at Morgan is subject to opinion; some good and others not so good. I asked students from the Morgan School how they felt about technology, and I received many anonymous answers such as, “good quality and new technology in the building, but inconsistent  access”

“It’s nice, but we need some improvements such as consistency. We will come to school and it will work for the first few periods, and then during a last period class, it just won’t be working at all.”

“For example, we’ll go into class and try to use web 2.0 tools, but Adobe Flash Player will only be assessable on half the computers in the lab.”

Also, from the teachers stand point: “This year the technology department has fixed and allowed us access to stream videos on YouTube which has been extremely helpful in class.”

As a new husky, Mr. Rossi explained that he is willing to work with staff at The Morgan School, “Of course!  In the short time that I’ve been here, my primary goal has been to develop a “feel” for each school.  How do the teachers and students perceive the current state of tech?  And, where do the schools want to go?  I hope I can make a daily impact of each school.” It was nice to hear the enthusiasm from Mr. Rossi and how he is getting to know the entire district.

Along with his current position I learned some impressive facts about Mr. Rossi’s past. He attended Roger Williams University in Rhode Island where he studied management, marketing, and finance. He also has a Master of Science in Education from the University of New Haven and a 6th Year Certificate in Educational Leadership from Quinnipiac University. Basketball has always been a part of Rossi’s life. He played in high school and college and then started coaching. For the last fifteen years, since he started teaching, he has either been an assistant or head coach. He added, “…so the rigor of season – schedule, hours, games, etc is nothing new and is something I hope I can continue to balance!”

As everyone here at The Morgan School knows, we take pride in what we do and who we are: huskies. So to close this off I asked Mr. Rossi what his opinion on The Morgan School was, and he said, “Everyone I have met so far seems excited and enthusiastic about what they do.  My first impression is that this is a community where people genuinely care.” As a student at the school, I am proud to have him here to help currently, and although  I am a Senior, I know Morgan will be left in great technological hands after The Class of 2014 leaves.